It’s come round to that time of year again. Yesterday the Northern Chamber Orchestra began rehearsing Bellini with the young conductor, Justin Doyle. Tomorrow we start on Leonore with maestro Stephen Barlow.

The NCO and the Buxton Festival have both come a long way since 1996 when we first appeared in Handel’s Amadigi. The orchestra had been in a crisis (one of many) and was being run part-time by our chairman, Brian Leighton, who asked me, the leader and artistic director, to deal with engagements! So I had to negotiate with Jane Davies who was running the festival at that time. Luckily it all went smoothly and the orchestra performed well enough to be asked again…..and again. A couple of years later we did our first opera with Jane’s husband, Wyn, with whom we always enjoyed working. There were a lot of comedies, generally in English, with usually some crafty reference to Buxton! At that time, living in London as now, I often stayed with Wyn and Jane and usually some singers at their lovely house in Rainow.

The middle years of NCO’s residency in Buxton were under Andrew Greenwood, who had been at Manchester Grammar School with me – I don’t think he was in the lacrosse team though – and with Glyn Foley running the festival. It was a time of growth and we found ourselves doing two or even three operas each year. I remember one time Andrew saying to me during rehearsals that the band was developing into a really good opera orchestra. Of course having a decent amount of rehearsal, accompanying some very fine singers with good conductors does help us to raise our game. One example of this was performing Ascanio in Alba with Harry Christophers and an outstanding cast. He was very demanding and got a very good response from the players. But the main thing we remember him for is coming into the band room on one occasion and on seeing three or four cakes made by the players (an NCO tradition in Buxton) decided that we should be renamed the Northern Cake Orchestra!

Recent years with Stephen Barlow started with Strauss’s Intermezzo – an extremely difficult piece for all of us. It felt like an audition for the orchestra and I, and I believe Stephen, was very proud of the band, who had all worked very hard before the first rehearsal to learn all the notes. Stephen always shapes each phrase of the music, something appreciated by me and the players; he is also calm and treats us as colleagues, which lesser maestros don’t always do. I can only recall one occasion when he got a little flustered – when he accidentally turned two pages during a performance of a rhythmically complicated Stravinsky piece. We are all very much looking forward to Leonore this season.

Of course we don’t only do operas! The players are always encouraged by the support given to our concerts. One’s memories tend to be of the unexpected or amusing occasions – Raphael Wallfisch warming up very audibly while we were performing Sibelius, the carnival procession with extremely loud pop music wiping out Handel arias, and not least, back in 2004, the strings going on stage at the opera house before we were supposed to start. I had to fill a little time so mentioned to our audience that we were pleased that Greece had won the European football championship – no response. So I said “well, anyone but the Germans!” – greeted by a very large cheer with only one dissenting voice – “zis is disgraceful” by a German lady on the front row. I was quite nervous during the difficult Rossini string sonata which opened the concert.

Finally we all love coming to play, and eat cake, in Buxton and hope to see you at the operas and our concert on July 18th (the maestro playing harpsichord). 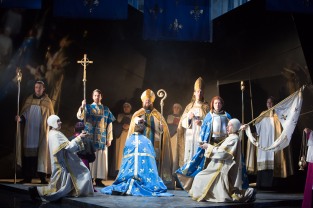